Kia ora koutou, warm greetings to you all.

As we mentioned in our last newsletter, the Religious Diversity Centre initiated an interfaith response to the UN Climate Change Conference, COP26.

The working group comprised people of different faith traditions who were well versed in the issues of climate change. Together, they prepared a Statement calling on the  Government to take the strongest possible action toward mitigating the climate crisis.
Endorsed by leaders from Buddhist, Baha’i, Muslim, Hindu, Sikh, Jewish and Christian communities and Interfaith Groups, the Statement emphasises the timeless teachings of religious traditions and of indigenous wisdom on how best to care for both humanity and the natural world. It draws attention to their own work on sustainable living practices and initiatives to reduce their carbon footprint, and it puts forward a number of recommendations urging the Government to take effective action, at the same time ensuring a just transition supported by appropriate public education.

Despite Covid related restrictions with regard to venue and numbers of people being able to participate in person, a ceremony took place on 19 October in the grounds of the Anglican Cathedral opposite Parliament Building in Wellington at which a group of members of different faith communities made a formal presentation of the Statement to Climate Change Minister James Shaw.

Dr Paul Blaschke, a member of the RDC working group gave a brief outline of the Statement.The presenting group – Anglican Archbishop Philip Richardson, Rehanna Ali from the Muslim community, Mandira Shailaj from the Hindu Youth Council and Niuean Sunlou Liuvaie from Palmerston North Interfaith Council –  offered their comments on the significance of the Statement before making the presentation.
The Climate Change Minister James Shaw acknowledged the Government for supporting the Pacific nations in their struggle to cope with the impacts of the climate crisis. Turning to the preceding speakers, he said: “I am tremendously grateful for the work that you all do in your individual faith communities. You are able to reach into communities that I can’t reach into and to have conversations that I can’t have, and ultimately, it is going to take all of us”.
He recommended that everyone alert their local MPs to the urgency of their concerns, and he pledged to take the concerns expressed in the Statement with him to COP26 in Glasgow. 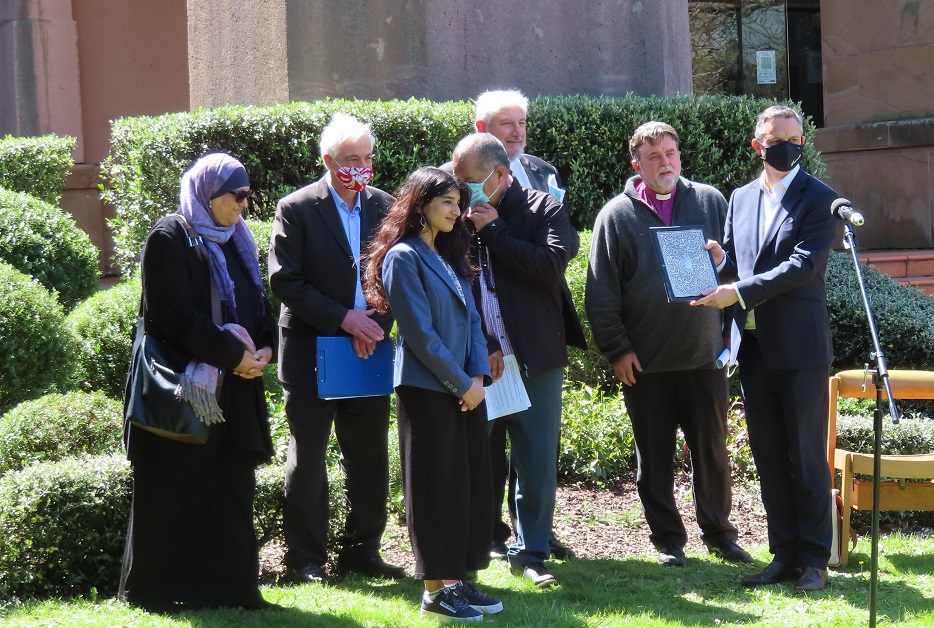 There will be an interfaith vigil in St George’s Square in Glasgow to mark the start of the Conference on Sunday, 31 October. Let us light a candle in solidarity with all those who are impacted by the Climate Change already, and keep the participants of the Conference in mind. Their decisions are crucial to the future of humanity and the natural world.

The Statement to Government from Religious Leaders and interfaith Groups is available on the Religious Diversity Centre website:  www.rdc.org.nz.
The UN Climate Change Conference COP26 will be held from 31 October – 12 November 202 1in Glasgow, Scotland.

The Team at the Religious Diversity Centre

Panel 2 – Beyond the Bubble – Report